After 27 years of service for Victoria Police, Senior Sergeant Brett Ward started to question his work-life balance. He was frequently deployed interstate and overseas, which was severely impacting time with his young family. So he made the difficult decision to retire. 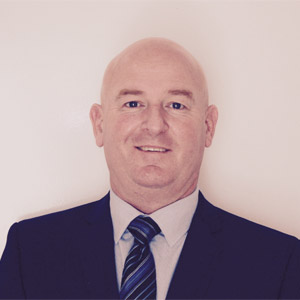 Brett had joined up straight after high school. Throughout his career, he had completed numerous training courses and operational competencies in order to work his way up the ranks, but none of it was formalised.

His initial plan was to be a stay-at-home-dad, while his wife worked in a full-time position she loved.

But after three months he says he, “Found myself wanting the challenge and respect that comes from full-time career work.”

However, finding a new job was not easy. The government and private sector positions he was applying for required a diploma as a minimum.

“All I had was HSC. After giving 110% for 27 years I had no trade to fall back on and no formal qualifications.”

It was a cold reality for Brett. “I’ve done all this stuff but I’ve got nothing in the hand to show the big employers.”

He goes on to say that even with his long and dedicated Police career, and outlining all his experience in covering letters, employers – “Still wanted to see formal qualifications – that bit of paper.”

The feedback to his unsuccessful job applications was almost always along the lines of – we appreciate all the experience you’ve got, but management needs a formal qualification.

And that’s when his wife noticed a post on Facebook about recognition of prior learning with Churchill Education.

Brett says the process seemed streamlined and that he found the free assessment, “very attractive”, so he got in touch.

Skills Recognition Advisor – Kelly explained the RPL process to Brett and told him what items of evidence she required in order to provide him with a preliminary RPL assessment.

Brett says, “It was very succinct with respect to what I had to produce, and within no time, to my surprise, my assessment came back with some substantial accreditation.”

Brett was eligible for:

Brett could see the value in enrolling in multiple qualifications. He says the process through mapping and payment to final qualifications was smooth and simple and that Kelly guided him through each part of the process.

As soon as he received digital copies of his qualifications by email (while his signed originals were in the post) he added them to his LinkedIn profile, and just 10 days later was approached by a company recruiting for a District Manager.

He went through the interview process and got the job!

His new role involves recruitment, training and mentoring across Victoria, NSW and Tasmania; focusing predominantly on emergency services and military personnel. It directly utilises the skills he developed in Victoria Police, in an entirely different industry.

Even though he had the capability all along, employers couldn’t recognise his competency without formal qualifications.

This new role has also restored his work-life balance.

Brett says, “I start from home, finish from home, and it’s Monday to Friday.”

He also says the hours are flexible, so that his wife can continue to work full-time, without having to rely on day-care or nannies for their young children.

With a four-year-old, a two-year-old and another one on the way, Brett’s new work-life balance is priceless.

…And his new position also represents a welcome increase in salary!

What advice does Brett have for others considering RPL?

“It’s not about producing a whole lot of documentation that’s outside your reach. All it took was a couple of simple phone calls, then everything was set up via email.”

Brett also has a caution…

Part of Brett’s new position involves recruitment. He says he often encounters people that – “Appear to have qualifications they are unable to demonstrate competency for,” and wonders how they got them.

The lesson? Make sure you choose a reputable RTO to entrust your RPL to.