MAKE THE MOST OF YOUR EXPERIENCEBook A Free Assessment
HomeNewsMy Health Journey: 45kgs Down and Counting!

My Health Journey: 45kgs Down and Counting! 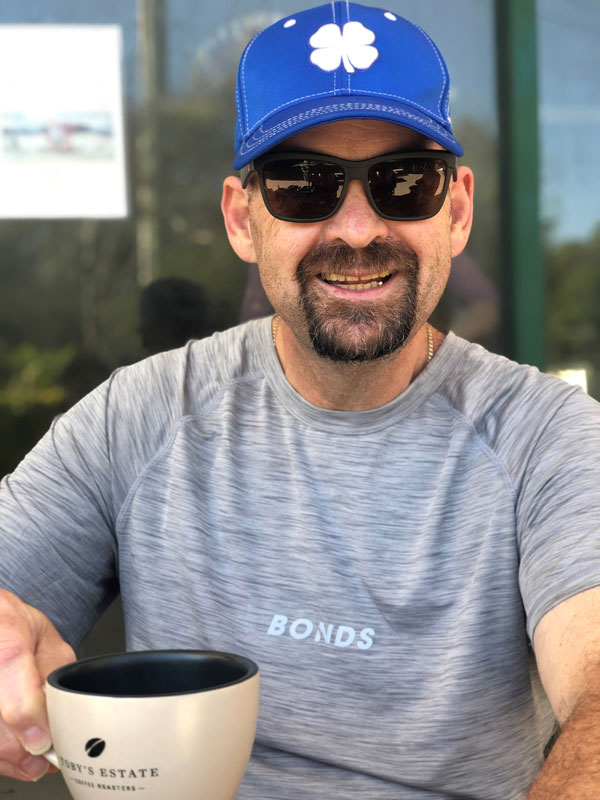 Several weeks ago I did something that shocked my wife Tricia, and blew up my personal Facebook profile ….

I shared a photograph of me in my jocks!

There was a reason for it …. You see, it was a before and after set of photos.

Before photo …. when I was weighing in at over 138kgs last year. I was considered morbidly obese, had been told that I had tipped over to being a Type 2 diabetic and was wearing 5XL clothes.

After photo …. when I was 100kgs, still considered overweight on the BMI but the doc was happy with my weight for frame, no sign of diabetes and for the first time in over 10 years I could shop for a pair of jogging shorts in Big W instead of a big man’s shop.

Now I am weighing in at 93kgs and closing in on my healthy weight range of 87kgs.

The last time I was this weight was back when I entered the Queensland Police Academy on 11 December 1989.

For me, it had become a matter of making some serious decisions as I was approaching 50 and my body was breaking down decades ahead of time.

It was right about then that Tricia, who had been experiencing her own health challenges told me she had made a decision: she was going to lose 40 kgs and she was going to have weight loss surgery. Now, being Tricia – she had researched her options with all of the fervour that a reformed lawyer never quite lets go of – and being me, well, I just said “if it is good enough for her, it’s good enough for me.”

Last November, I went under the knife.

Leading up to this, I had also been tackling my mental health consistently over the last four years, and had reached the point of wanting to get off anti-depressants. In consultation with my psychiatrist, Dr Andrew Khoo (a great bloke who has done a video on PTSD you could check out here), we came up with a plan to wean myself off the meds and replace them with exercise.

With the weight coming off, I have been able to churn out the exercise. Most days, I walk up the hills around Samford Valley for two to three hours, averaging around 15 kms. On weekdays, I break it into two sessions during lunch and after work. Then on the weekend, I usually do one solid session of 20kms straight.

It has worked for me – I’m off the anti-depressants and on the exercise high.

I was taking Zoloft for 15 years and I thought I always would be. I was fine with that – always been a big fan of chemicals when they improved my health. I’m still happily taking some sleeping tablets at night to maintain a good sleep pattern. But as my overall health got better, I knew it was time for me and Zoloft to part ways.

Losing the weight and the tablets has been a massive change for me. And I am not alone – the team here at Churchill have been putting in a big effort to drop weight and move more.

Together, our team has lost well over 120 kgs in the last year!

…. and we haven’t found it again! It’s now become common to see several of the team walking into the office in their exercise gear having boxed, pounded the pavement or put in some solid kilometres on the bike. Kilos are being shed all round, fitness is improving and our overall wellness is going up.

As this whole weight loss campaign has progressed, I have noticed ….

Five things that have made a real difference to our success:

1. Get expert advice to come up with a plan

No matter the approach that each of us have chosen in tackling our personal health kick, we have all sought out information from the experts. Doctors, physios, personal trainers, dieticians, podiatrists, mindset experts. They gave us the information about how to do this in the best way for us.

For example, the dietician and surgeon looked at my health issues and began a plan that worked best for me and the goals I have. Sure, it cost me a little bit of money upfront but overall the money spent is nothing compared to the money I have saved and the positive changes it has brought to my life.

2. Get the tools to make your experience easier

The right tools make life so much easier. It is no secret that I love myself a little bit of tech to make life simpler. The Churchill team have heard my mantra, “if it is not on Strava, it didn’t happen.” Strava is the app I use for tracking my walks and gives me all the details about how far, high and fast I went.

Plus, I’m walking on the verge of busy roads in the dark so I have myself a good head torch that adjusts to light levels. I also have some good walking boots that one of the experts recommended. Together, it has made the experience easier which has meant I have achieved so much more than I thought I could.

We’ve aimed to do the same thing for our clients in the RPL process – putting tech to good use to make uploading evidence simpler and leveraging our years of experience to ensure RPL is a straightforward process that helps people achieve their goals without the pain.

3. Talk to other people who have already been successful

It has been really encouraging to hear from people who have already made the change that we wanted. So, we found positive stories from other people – in person, on blog posts and in Facebook groups. It has helped us learn from their stories and remain positive. Making changes, whether it is in health or career, always has its challenges so we have a choice: focus on the nay-sayers or find the people that have done what we want to do and get pumped up with their success.

The power of knowing where you are heading makes an enormous difference. I’ve learned that I don’t have to know exactly how this is going to pan out to get started, but I do need to start with a direction in mind. There’s power in making a start, and telling people you are heading there. It is amazing who comes out of the woodwork to support you along the way.

My first goal was made in 2015 to be the best Randall Smith I could be – and that meant tackling my mental health differently. When it came to weight loss, my first goal was to get to 105kgs. I thought that would be enough. And it was as a start. Then I thought if I could crack 100kgs that would be magic. After that I started thinking about walking 5kms a day. And it kept going.

The same thing happened when I left the police – I set a goal to do work I enjoyed that let me provide for my family. Did I see Churchill in my future? Not at that time. But I told people what I was thinking about, and the ideas came – and here I am 13 years later. Talking about one goal leads to achieving it and then setting a new goal. Each step forward is a step to be proud of.

The truth is I have been on more diets in my life than I can count. I’ve been to Weight Watchers, chugged down the Tony Ferguson, filled my plate with steak and ditched the carbs. Over time, I got used to being overweight and I got used to taking my anti-depressants each day.

When it came time to make a change, I had to believe I could do it. At first, someone else had to help me see that I could. My wife – Tricia, always believed in me, and my pscyh – Andrew Khoo, always believed in me. I leaned on them to see the possibility of change and began believing in myself.

Finding people who can see your possibility makes the world of difference, no matter what you are tackling in life.

So, that’s me …. closing in on my goal of weighing 87kgs and being a fit and healthy bastard!

If you have a goal I can help with, let me know …. we’re always here to help.

P.S. Tricia tells me I’m not allowed to include my before and after photos, but if you aren’t squeamish and feel like a look at my weight transformation, shoot me a message …. I’ve got no shame!!