Respect and Gratitude for Courage and Commitment

As the Chief of the Defence Force received the Afghanistan Inquiry report from the Inspector-General of the Australian Defence Force, my mind has turned often to the true value of recognising the many women and men who have served in the ADF. 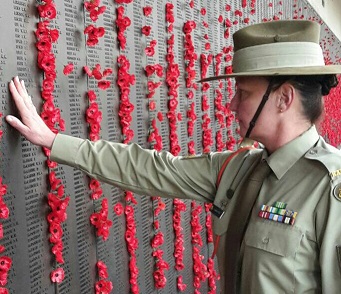 Before I was born, my father was in the Royal Australian Navy, back in the late 1960s.

It is not something he has talked about much.

Until recently, I didn’t even know that he registered for National Service.

I am not sure he would even have told me he was deployed to Vietnam if there weren’t some old photographs floating around – and some tattoos that told more of the story than he ever shared out loud.

I do know that he says he was not well suited to being told what to do … not much has changed there, still at 70 years he is most definitely not a fan of being ordered around.

And I do know that he holds great admiration for the service of other Australian Defence Personnel, even as he shies away from sharing any insights into his own service.

We talk to serving ADF and veterans every week. And consistently, they are women and men of few words when it comes to the significance of their service.

I was shocked to find we are having to guess for this number.

102,888 Australians have died because of their service in war.

Countless others have been wounded and become Prisoners-of-War.

Sadly, too many have ended their own lives.

I started looking back through the records to determine how many Australians have served at war and found that we are still not totally sure of that number either.

From 1885 until the conclusion of the Vietnam war, approximately 1,486,495 Australians had served in war.

From that time on, Australians have continued to serve – both at war, in operations and in peace-keeping missions around the world.

We know that for every ADF member serving overseas, there are countless service personnel making that happen in Australia.

In total, these numbers as they stack one on top of another leave me in awe. This is an extraordinary depth of service spanning many decades.

And as I have reflected on the conversations coming out of the Afghanistan Inquiry Report, I began to wonder of the many veterans in Australia, and the ADF personnel in Australia, how many are listening to these conversations and still humbly saying little about what they have given through their own service?

The next steps that flow out of the Report, these steps are the responsibility of the authorities and the 25 people nominated in the report now.

The responsibility to continue to recognise the honourable service of our veterans, past and present, and the serving ADF personnel, well, that lays with the rest of the Australian community.

We thank you for your service.

You may not speak of it, but we will, now and into the future, with respect and gratitude for your courage and commitment.

And we will never forget.

P.S. Should you need support through this time, these services provide a high standard of care and support for ADF personnel and veterans: