MAKE THE MOST OF YOUR EXPERIENCEBook A Free Assessment
HomeBlogBe Flexible, Chase Your Dreams, Never Underestimate Yourself

Be Flexible, Chase Your Dreams, Never Underestimate Yourself

From protecting ambassadors in the war zones of Iraq and Afghanistan, to managing security for the Australian Cricket Team, Gold Coast Commonwealth Games and global celebrities, Glenn Upson is a great example of the opportunities available in the SecurityRisk Management Industry. 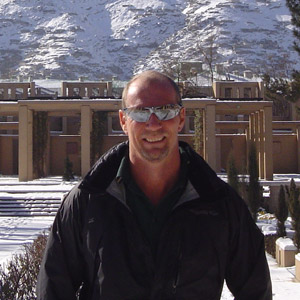 Here is his story…

Glenn began his security and risk career straight out of high-school, joining the Army at 18. He progressed to infantry, parachute battalion in Sydney, then after three years in the military, Glenn took action on a long-held desire to follow in his father’s footsteps, by joining Victoria Police, and later Queensland Police (QPS).

After a few years of, as Glenn puts it, “general duties and a bit of covert surveillance drug operations”, the soldier in him wanted a new challenge, and so he set his sights on qualifying for the Special Emergency Response Team (SERT) – the high-end, counter-terrorism, hostage rescue, top-tier policing unit.

“It was always in my dreams, since I was in the military. It’s about testing yourself and then committing to something bigger than yourself.”

Glenn went through a rigorous selection process designed by the SAS, involving three days of sleep deprivation, lack of food, stimulus testing for fear of heights, deep water and enclosed spaces – from dusk ’til dawn.

The course is designed to take participants to their absolute limit, and for some beyond. “Quite a few get broken along the way, damaged, injured or just decide it’s not for them. I left with lots of abrasions, cuts and lost six kilos in three days. It’s a full-on test of character.”

Three out of 111 completed selection. One of which was Glenn.

Part of Something Bigger

Glenn says SERT, “Are the guys you don’t hear much about because they’re kept under wraps. You don’t see them or read much about them because of the requirement for anonymity.”

It’s for people who are motivated by service, not accolades. “It’s not about you, it’s not about medals, it’s just about being part of a team keeping people safe.”

A few years in to his time with the SERT he received a phone call from a mate from his military days. He was part of the military protection detail that was being deployed to Iraq during the 2004 conflict, as part of Australia’s commitment to the coalition forces. They were looking for someone from police to join the team.

Life in the Sandpit

With a few years of SERT service, and a military background, Glenn ticked all the boxes. Later that year he landed in Baghdad as part of the Protective Security Detail (PSD) posted to protect the ambassador and ministers on the ground in Iraq.

The plan was to spend 12 months in Iraq, then bring that knowledge back to the SERT unit at home. However due to a number of factors, 12 months turned into six years – four in Iraq and two in Afghanistan.

“We were in so much stuff over in that world. We could be in conflicts every second day – cars and hotels getting blown up,” he says.

Some of my close friends over this time were good men who unfortunately didn’t come home.

So in 2010, despite part of him loving the danger and adventure, he felt the risks were too great.

“It’s really a lottery, it’s rolling a dice. The more times you go, the more chance you’re not coming home and how much money is that risk worth?”

He’d initially tried going home in 2007. He went from the wild and dangerous experiences of The Badlands to, “Sitting in a cubicle, watching a wall clock go tick, tick, tick through a pile of files.”

He lasted four and a half weeks, then took a contract back in Kabul.

After two more years of eight on / three off weekly rotations, it was family and the need for a better work-life balance that brought Glenn home for good.

Soon after arriving back on Australian soil, Glenn started a position working as a principal investigator in the Queensland Government sector.

It was around this time that Glenn met Churchill Education co-founder Randall Smith, and immediately felt a bond of trust and mateship when Randall told him he was an ex-cop too.

During his time in the middle east, Glenn had set up his own security business with a view to building it slowly over time.

Glenn shared his ideas and plans with Randall, who helped Glenn to convert his years of experience into a Diploma of Security & Risk Management through the recognition of prior learning pathway (RPL).

Over the next few years Glenn also converted his service career into a number of other qualifications through RPL including: Diploma of Government Investigations and an Advanced Diploma of Integrated Risk Management. Doing so enabled Glenn to qualify his skills and training to relevant clients and Government bodies.

Setting up his own Security Business

After what he describes as the longest two years of his life in a desk job, Glenn decided it was time to bite the bullet and go all in with his security business. “I’m not going to build a business successfully if I’m working for the man, so to speak. It’s either 100% commitment or not,” he said.

In 2012 Glenn went all in on his security business – CorpSec International. In the early days he and his team did a lot of government investigations work, which they still do today. But his business has grown and expanded considerably between then and now.

Buoyed by a desire to, “Get back out and about and on the tools,” as he puts it, Glenn started putting his name out to international contacts, and quickly began picking up individual contracts.

He did a lot of work in Qatar and the UAE, training special forces on crisis management, survival exercises and weapons handling. Meanwhile he was frequently on the phone to Randall at 2am in the morning, figuring out how to build training courses that would align with Australian qualifications, or a recognised statement of attainment.

As the company grew, so did Glenn’s reputation, and he started getting all sorts of opportunities coming his way.

He delivered security for the Australian National Cricket Team in Bangladesh, spent 18 months managing security for the Gold Coast Commonwealth Games, and then into Close Personal Protection jobs for some very famous music stars – keeping them safe during their Australian tours.

Glenn has had a number of substantial career changes over the years. Some driven by desire and some by circumstance.

He credits his ability for change to his dad who told him:

“Mate, unless you’re getting thrown into the canal by the mafia, don’t wear concrete boots. Be flexible enough to move, and back yourself to make those moves.”

Glenn says he’s reached a point in his working and family life where things feel good. He’s not in high risk environments, so his wife is happy. He’s not stuck behind a desk, so he’s happy. And he’s able to provide a stable and secure home for his children.

What’s next for Glenn and his company?

“Well I’ve been offered a contract in Malaysia which I’m deciding on. And I was down in Melbourne the other day, talking to an industry contact about delivering security for other celebrities and high profile individuals.”

It’s a long way from the Badlands of Afghanistan and Iraq, and is a great example of the infinite opportunities available in the security industry. There’s corporate and government security work, international peace-keeping, and then there’s working with celebs, entrepreneurs and private individuals.

It’s a matter of finding your place in the industry – according to your skills, desires and needs.

Glenn admits he’s an, “on the tools” guy. He might be running a company, but ultimately his passion is being on the ground, in the action. He says the entertainment work is great. It’s exciting, low risk and lucrative. “We’re staying in five-star hotels, instead of bombed out villas with no power or water where your safety is at risk continuously!”

It utilises his skills, fulfils his desire for action and excitement, but also gives him time with his wife and kids, whilst also being low risk.

That’s not to say it’s always an easy balance to maintain. Glenn admits, “It’s hard because if it was just me, I’d go and play in the Badlands forever. But to be a good husband and father I need to be home.”

Running his own security business, which has now expanded to include three partners, allows him the freedom to run his own show, make his own decisions, take on interesting contracts, keeps him safe and gives him time with his family.

How can you get into the security industry?

Glenn is a big advocate of life experience. He says, “You can’t just go and get your crowd controllers’ license and then apply for a job doing protective security detail over the Saudi prince. You’re just not ready to play.”

He says it’s much better to get some experience under your belt first. “Get out there in the real world and have a look, then you can use an organisation like Churchill who can tell you how your experience aligns with qualifications in the civilian world.”

Glenn says his newest business partner recently gained a number of qualifications through Churchill. He has a 40-year police career behind him, and now has the nationally recognised qualifications to reflect his value to the clients he speaks to. Without those, no one outside of police can appreciate the value of his service.

We were very inspired by Glenn’s story, and we hope you were too. If there’s one piece of advice to take away, we reckon it’s what his dad told him as a boy:

“Be flexible, chase your dreams and never underestimate yourself.”

If you’d like more information about opportunities in the Security Risk Management industry, be sure to check out our SRM Industry Report.