MAKE THE MOST OF YOUR EXPERIENCEBook A Free Assessment
HomeNewsMarch On: Why I’m Walking 96kms in a Moon Boot

March On: Why I’m Walking 96kms in a Moon Boot

Hi I’m Trent, a veteran of the Australian Army and Churchill Education’s Lead Recognition of Prior Learning Assessor. I’m currently in a moon boot, and about to tackle 96kms for a fundraising campaign called March On. Let me share with you why…

Throughout March I will be participating in a fundraising campaign called March On. And because I fractured my ankle on the trails, I’ll be doing it in a moon boot!

March On is a 96-kilometre walking/running challenge created by Soldier On Australia – a not-for-profit veteran support organisation. The purpose of March On is to raise funds for lifesaving mental health services and other support services for current and ex-serving Australian Defence Force (ADF) members and their families.

Why am I committed to walking 96kms in a moon boot?

Soldier On is one of the services I continue to use as a veteran to receive support and not feel alone in my transition journey into civilian life.

I was deployed to Afghanistan for the best part of 2018. It felt so good to be doing what I’d been trained for. Like finally making it into a grand final. When I came home, my post-deployment assessments flagged that I needed to talk to someone.

I knew something wasn’t right but didn’t think it was that bad.

Then I took a knee to the back in army rugby and broke two vertebrae.

Instead of the back to Australia holiday my partner Steph and I had planned, I spent six weeks immobile on the couch, with Steph having to do everything for me.

I’d heard surgery horror stories, so I opted for rehabilitation instead. I’d also dislocated my knee during active service and in the end was deemed not fit for service and medically discharged.

At the time I was putting in long hours in the training cell during the Townsville floods, and I was planning on being an ADF lifer, so this felt like a completely kick in the guts.

Meanwhile Steph and I were expecting our first child and had decided to relocate back to Newcastle to be near family.

This disconnected me from my military friends.

So there I was, injured, unemployed, soon to be a father, feeling completely disconnected from anyone who understood the experiences of deployment and the transition to civilian life.

Things got pretty dark for a while there.

The importance of veteran support services

Then I reached out to Soldier On and was connected with likeminded people. It gave me the companionship, connection and direction I vitally needed at the time. It was literally a lifesaver.

Through Soldier On I had access to career expos, frequent veteran gatherings, coffee dates, mentors and things to keep me engaged with life. You might call it ‘mate therapy’!

This really helped to put me back together. Through these and other veteran support services I was able to physically and mentally rehabilitate and start thinking about the future.

New career and looking towards the future

A mate had told me about Churchill Education’s RPL service. I got in touch, had an assessment and discovered I was eligible for a bunch of great qualifications. This really opened my mind to a range of possible civilian career opportunities.

It so happened that Churchill was recruiting for an assessor at the time, so I threw my hat in the ring and what do you know… I got the job!

The best part of my job is helping veterans and other Australians in career transition to know their value and have that reflected in national qualifications.

The services Soldier On and other veteran support organisations provide are essential. Without them I’m not sure where I’d be today.

I am so thankful I am now in a space where I can enjoy being a father to my two-year-old grown-up Arlo, a loving partner to Steph and help other veterans establish a new career and future for themselves.

Why is there a need for fundraising?

According to the Australian Institute of Health and Welfare report, 1273 former and serving ADF personnel took their lives in the years 2001-2019.

This report was the nail in the coffin for the Prime Minister’s sign off on the Royal Commission into Defence and Veteran Suicide.

96kms signifies the length of the Kokoda Trail, one of the most important battles for Australians in WWII. These brave souls were Australia’s last line of defence against invasion.

Would you like to join the Churchill Education March On team and help us raise some much-needed funds for this very worthy cause? All you need to do is walk 96kms in total throughout March. That’s only around 3kms a day.

If you’d like to join, shoot us an email at hello@churchilleducation.edu.au and we will send you an invitation link to join our team. 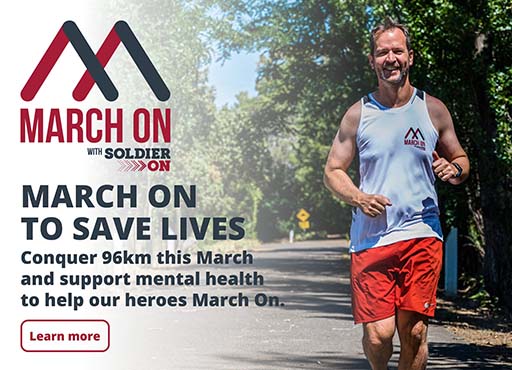 Ticket to not walk!

If you’re thinking, ‘Hey Trent, I’d love to support you but don’t want to do the kms,’ I’ve got good news for you! You can donate to the Churchill March On team here. Anything no matter how small would be wonderful.

Something else we’ve decided to do is give you the option to donate your Alumni referral reward to March On throughout the month of March. The Alumni Referral Rewards Program entitles you to a $100 thank you when someone you refer enrols in their first qualification with us.

You can find out more about our Alumni Referral Rewards program here.

Too many of my mates have committed suicide from service-related issues and the lack of post service support. ADF members sign a dotted line that may cost them their lives in battle, for the greater good of the nation. The least we can do is provide support for the mental battles they fight back home.

P.S. If you are wondering how I ended up in a moon boot, let’s just say trying to keep up with Randall on the trails was an adventure in itself!